What are Nogier Frequencies?

To understand Nogier Frequencies and how LED Light Therapy applies them, you must first understand a few basic tenets of Vibrational Healing, also known as Energy Healing. For a deeper dive into vibrational energy, please see our blog.

All matter is made of atoms, which are in a constant state of vibration — from animals and plants to inanimate objects and even people. All beings and objects vibrate at their own Frequency — a rate of vibration measured in cycles per second. Expressed as Hertz (Hz), one cycle per second equals 1 Hz. And within our bodies, healthy systems and tissues have their own healthy frequencies. When these systems stray from their healthy frequencies, illness occurs.

This system of sound-based frequencies — sound is another form of vibration — was discovered and developed by neurosurgeon and scientist Dr. Paul Nogier in the 1970s. Nogier was able to identify the various resonant frequencies of healthy tissue, all of which are harmonics of the musical note D.

How Does the LED Light Therapy Use Nogier Frequencies?

By combining PBM with Nogier Frequencies, the body receives healing from both light and sound, providing a remarkably comprehensive application designed to relieve pain, increase circulation, decrease inflammation and stimulate cellular repair. According to Dr. Nogier, sickness results when cells, molecules or particles of matter are out of their normal resonance or vibratory pattern. By repeatedly exposing damaged tissue to the normal resonance frequencies associated with that tissue, healing often occurs, sometimes quite rapidly.

Generally speaking, it has been found that lower Nogier Frequencies are most effective at stimulating cellular growth and regeneration, while higher frequencies have the best sedation effects, alleviating pain and inflammation. 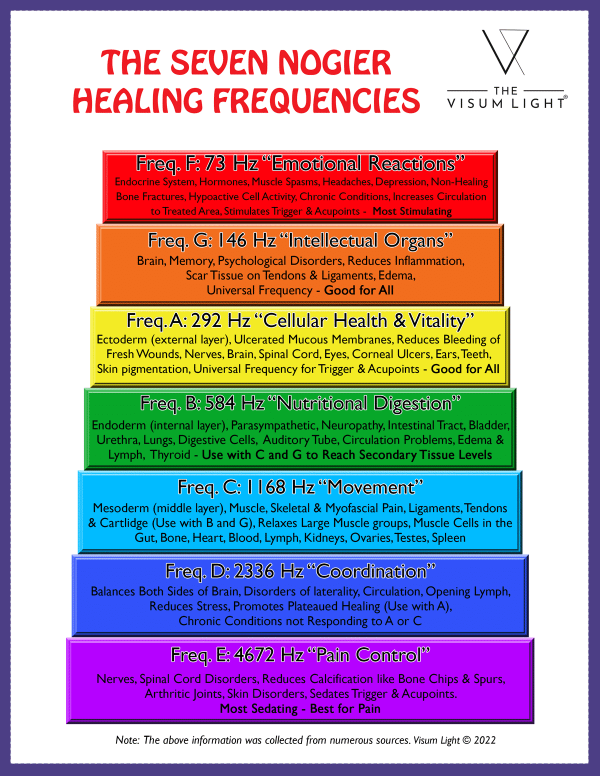 Nogier frequency effects can be enhanced by utilizing multiple frequencies simultaneously. These combinations of frequencies are especially effective in local therapy. In general, when working on Pain use E, F, G. When wanting to regenerrate tissue, use A, B, F and when healing soft tissue/muscle C, D, G are the go to frequencies.

The Visum Light has determined the following combinations for our pre-programmed patterns:

Let’s say you suffer from skin inflammation and scar tissue, perhaps from a long history with acne. Blue light therapy has been shown to be a wonderful treatment for such conditions. By combining it with the “G” Nogier Frequency at approximately* 146 Hz, you’re giving your body the best chance at healing and recovery. Or, you could use the Pre-programmed pattern P5 for skin and take advantage of those frequencies.

Perhaps your pet has chronic joint pain and inflammation. Near Infrared Light has been found to be a highly effective treatment for this common condition. Combine NIR sessions with the “C” Nogier Frequency at approximately 1168 Hz, or Pre-programmed Pattern P3, and you maximize your pet’s pain relief, further improving their quality of life.

Musculoskeletal pain is one of our most common issues, affecting everyone from young athletes to the aging. Blue, green and some Polychromatic Light Therapies have all been shown to help. And with the “E” Nogier Frequency at approximately 4672 Hz, or the Pre-Programmed Pattern P3, you can take control of your pain management and find the relief you’ve been looking for.

All of these conditions and more can benefit from Nogier Frequencies, which is why they’re an integral part of the patent-pending Visum Light. And best of all, no matter how you combine the Visum Light’s many therapies, it’s still noninvasive, drug-free, and pain-free — with virtually no adverse side effects reported.

To learn more, take a look at our 45-day No-Worries Guarantee and convenient financing.

And for the latest news, research and special offers, sign up for our newsletter! 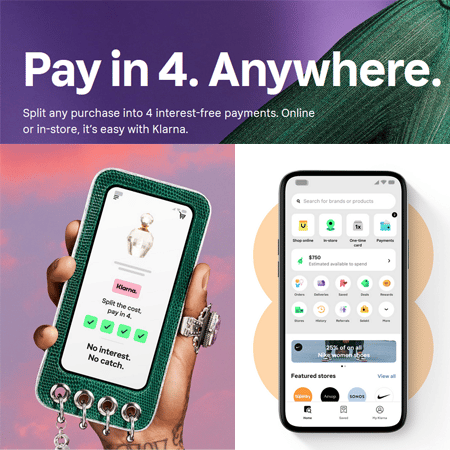